By SHI JING in Shanghai 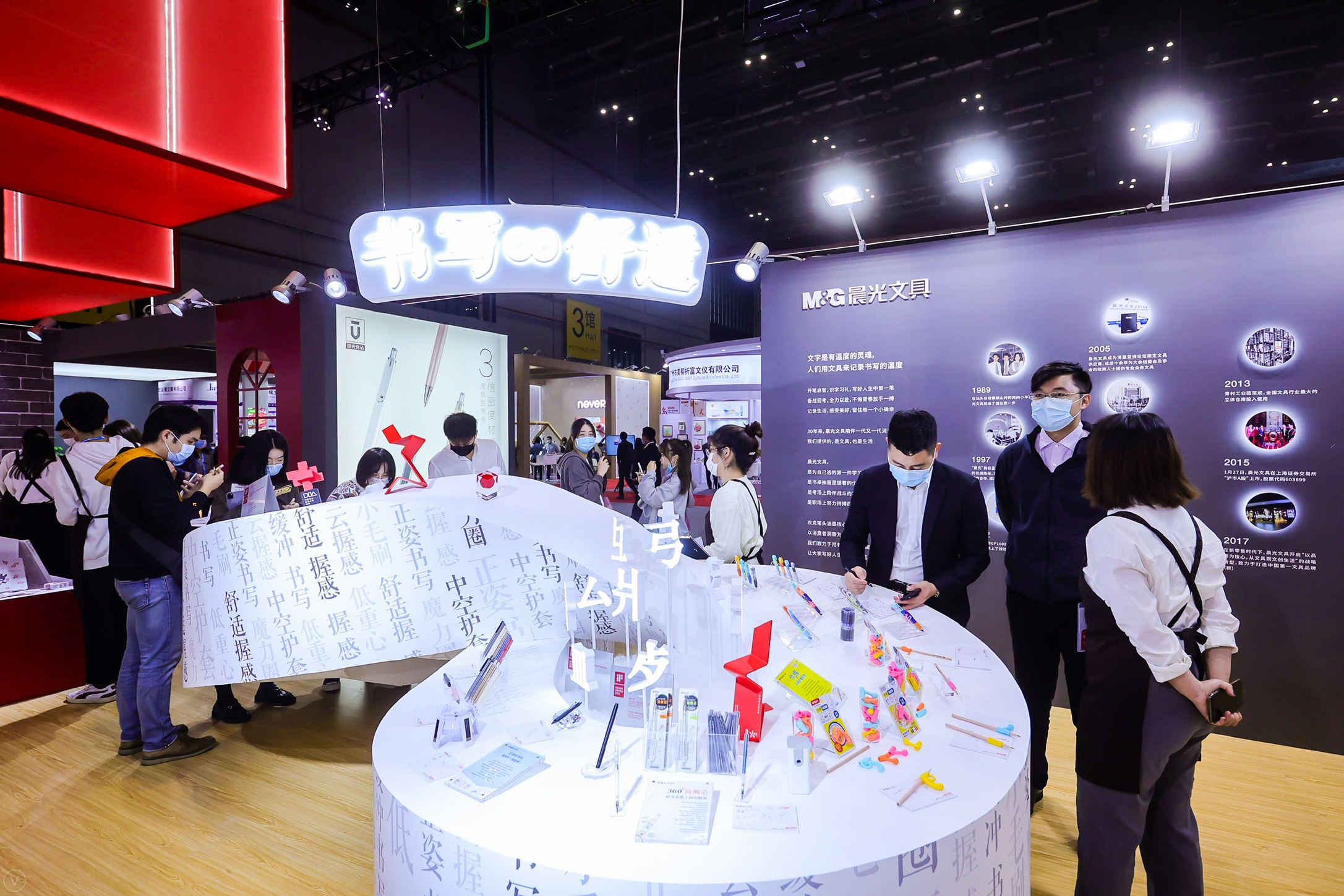 Visitors throng the stall of Shanghai M&G Stationery Inc at the Paperworld China 2020 exhibition in Shanghai on Nov 19. Paperworld China is one of Asia's leading exhibitions in the office supplies, stationery, hobby and crafts industry. [Photo provided to China Daily]

Over the past 31 years, Shanghai-based Chinese stationery brand M&G has been ubiquitous in offices and homes across the country. Its gel pens are particularly popular.

Now, Shanghai M&G Stationery Inc, the owner of the M&G brand, is going global with a well-defined five-year strategy, according to Chen Huxiong, its founder and CEO.

Established in 1989, M&G makes its products available in nearly 80,000 retail stores in China. It opened another 440 large-scale brand-exclusive physical stores.

Though going global was not highlighted in the company's strategy in the past, M&G still managed to sell its products to consumers in more than 50 countries. Sales and purchase networks were set up in markets like Thailand, Vietnam and Malaysia.

The Chinese domestic market accounts for more than 90 percent of M&G's annual revenue at present, said Chen. In other words, there is a lot of room for overseas expansion.

"We have mainly served the domestic market for the past three decades, making huge investment every year to cater to the consumers' demand. But as the quality of M&G products improves and the company's supply chain matures, M&G should look beyond and find more opportunities in the overseas markets," said Chen.

Instead of working as an original equipment manufacturer or OEM for overseas brands, which is the practice adopted by many Chinese manufacturers seeking to enter new markets, M&G stuck to the rule of developing products under its own brand name.

To that end, M&G will further improve product quality via more innovation attempts and optimization of distribution. The company has much experience and knowledge in the above two aspects.

It invests over 100 million yuan ($15.4 million) in product development annually. New products are available at all retail stores in China within one week's time so that the company can get market feedback more efficiently.

"Soon, we will be at the very early stage of our go-global strategy. So, quality comes first. First things first," said Chen.

Another ground rule is localization. One of the company's signature products, the gel pen, which is very popular in Europe, has undergone changes in terms of ink formulation and the size, according to the preferences and habits of the local consumers.

"Our expertise gained over the past three decades lies in the capability in production, management, brand-building and exploring new markets. What we shall do in the following years is come up with more localized products and business models to build M&G into a world-leading stationery brand, a long-term goal specified in our half-yearly report for 2020," said Chen.

Different tactics will be adopted in different markets. In developing countries, more efforts will be made to build the brand name and set up its own distribution channels.

In developed markets, capital will play a bigger role as M&G aims to penetrate mature markets via mergers and acquisitions.

M&G started a number of investments in 2019. It invested in Italian coloring and drawing brand Carioca SpA to become the latter's minority shareholder in February 2019.

In March 2019, M&G became the controlling shareholder of Axus Stationery (Shanghai) Co Ltd by acquiring the latter's 56 percent stake. Established in 1992, Axus' products have been sold in more than 80 markets. It has over 50 patents for processing techniques for pencils.

Axus is also the parent company of the well-established pencil brand Marco. By teaming up with Axus, M&G can not only enhance its capability in product research and development, but also stimulate its businesses in the overseas market, according to the company.

The third label that M&G acquired in 2019 is Israeli high-end gifting and household items brand Peleg Design, which made its debut among the Chinese consumers at the third China International Import Expo in November 2020.

M&G and Peleg announced at the CIIE last year the establishment of the Israel studio of M&G's global design center, which aims to attract more leading designers from all over the world to inject more vibrancy and originality into M&G products.

Ding Yuan, vice-president of the China Europe International Business School, wrote in a note that a better understanding of the relationship between the Chinese market and the global market is of great importance for outbound Chinese companies, given the changes brought by the unexpected COVID-19 pandemic.

Companies should adopt a more rational attitude while deploying capital globally, as money should be used to connect only with the right type of overseas resources.

"Outbound Chinese companies should go deeper into the industry in which they specialize, completely integrate overseas resources and give full play to their expertise. Only in this way can they grow into multinational companies with a global vision, a sense of innovation and capability to manage a complex international governance structure," wrote Ding.

President Xi Jinping said at a private enterprise symposium held in November 2018 that the Chinese privately owned enterprises should further expand their international vision and enhance their innovation capability and core competitiveness so that more globally competitive companies can be nurtured.

Chen said M&G's mission is aligned with the national goals. "In terms of the entire manufacturing industry, stationery may only take up a very small part of it. But companies can go very deep into respective industries despite their (seemingly small) size.

"If a world-leading Chinese company can be nurtured in each specific sector or industry, the quality of 'made in China' products will significantly improve, thereby burnishing Chinese brands globally," he said.